If a pianist wants to sit lower than 17″ from the floor (the lowest level to which most standard piano benches can be adjusted) then he/she will surely find, as did I, that the task is easier said than done.  Such was my predicament when, in preparation for a recent performance of J. S. Bach’s Goldberg Variations, I needed to come up with a suitable seating arrangement.

It all began a year or so ago when, amidst preparations for Glenn Gould 905, a Canada 150 event that I was coordinating for The Chamber Music Society of Mississauga, I happened to have the pleasure of housing for a few days, the “other” chair of Glenn Gould.  The chair had been loaned to me by Glenn’s friend and colleague, Lorne Tulk.  (If you haven’t heard of this chair, then please check out the blog post titled, “Taking Care of Glenn’s Chair”.)

While I’ve been known to sit low at the piano, I had never sat as low as Glenn.  Just 14″ inches from the ground is what his chair measured at and that wasn’t counting the 3/4″ high blocks of solid wood (cut into 4″ x 4″ pieces) that were placed under the legs of his piano.  This would have put him at about 13.25″ from the ground!  The thought of getting through any piece at that height seemed next to impossible, that is, until I tried Glenn’s chair.

Lo and behold, seated at 14″ from the ground (that’s 3″ lower than I normally sit) I found the Goldberg Variations more manageable to play, the treacherous cross-over passages (Variation 25, in particular) having been considerably alleviated by the fact that my forearms were now parallel with the keys.  The lower bench height allowed me greater efficiency of movement.

It was incredible, Glenn was really on to something!  “You should use it for your performance,” Lorne had told me.  After telling him that I didn’t want to break this piece of musical history, he added that, “You could never break the chair.  Glenn was much heavier than you are and he was very rough with his things.”

This was all well and good however I was not going to run the risk of forever being known as “the girl who broke Glenn Gould’s chair.”  The chair creaked and jiggled enough as it was.  Having played on the chair for just a few minutes, I then went back to my usual companion, an old dorm chair from the Manhattan School of Music.

After returning the chair to Lorne, I began thinking about how I might go about finding my own chair of a similar height.  Admittedly, it would take a bit of getting used to, playing so low to the ground, however, the things I was able to do in the Goldberg Variations at that height, technically and musical speaking, were exciting enough to make me want to seek out my own version.

I began by asking my mom to measure a few of the chairs that we have at home in Sault Ste. Marie.  This would give me a good starting point.  Alas, the black fold-up metal card table chair that had accompanied me at my Royal Conservatory ARCT piano exam back in the 1990’s was, at 17″, too high. 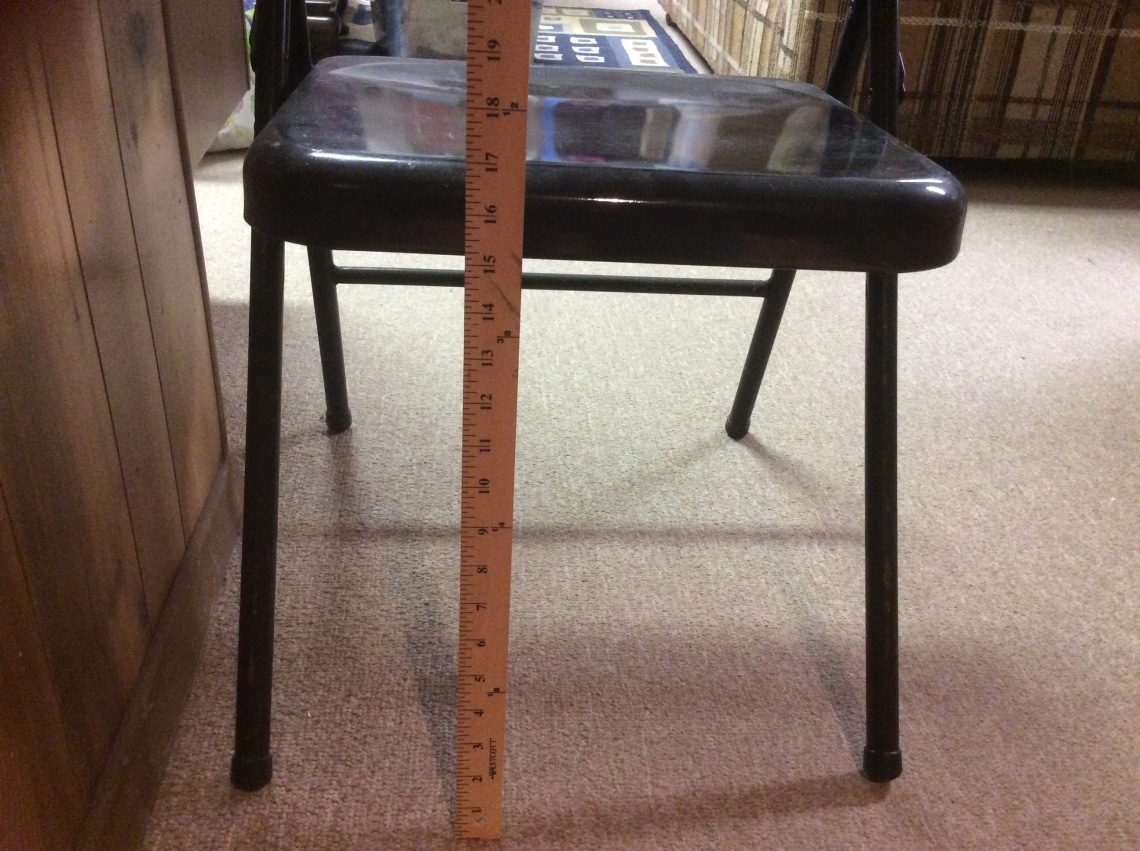 Next up was a chair that had belonged to my great-grandparents.  Quaint and full of vintage charm, this chair was also too high. 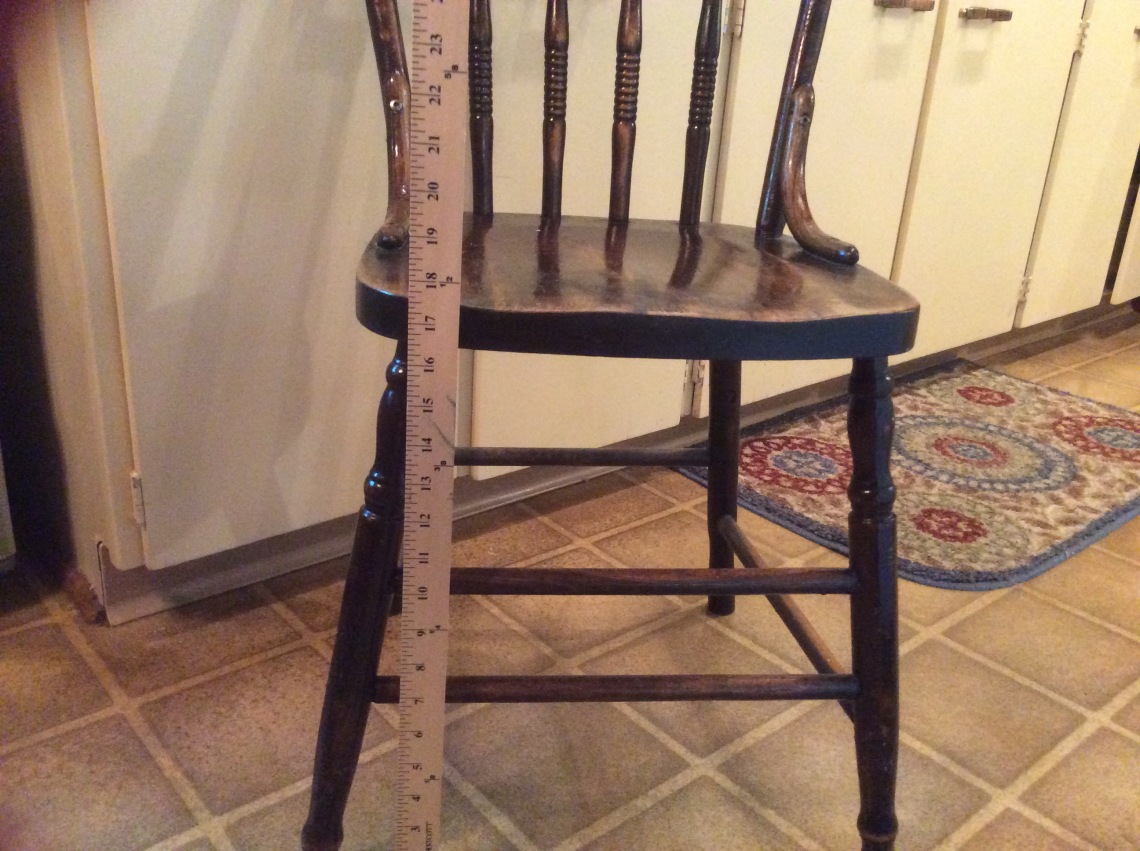 Having been sure that one of these family chairs would serve my needs, I then began investigating other options.  These included a Poang footstool from Ikea measuring at a height of 15 3/8″.  While this may have been perfect for relaxing in the living room, for my needs this sloped little number would not do. 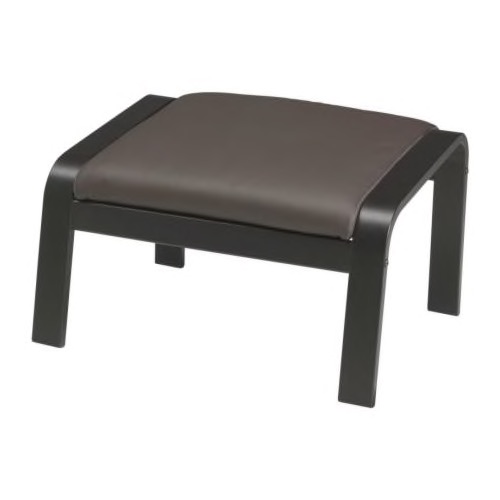 Next up was perhaps the worst possible option, though admittedly not for reasons pertaining to height.  Accommodating 14″ – 21″ in height, the adjustable tub and shower chair by Moen offered the right measurements but nothing else.  Perhaps if one were to paint it black, this chair might work?  Still, the curved seat would be disastrous for playing anything at the piano. 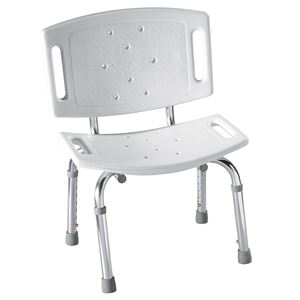 It then occurred to me that perhaps an adjustable piano chair might work.  These chairs have always seemed popular amongst piano accompanists. 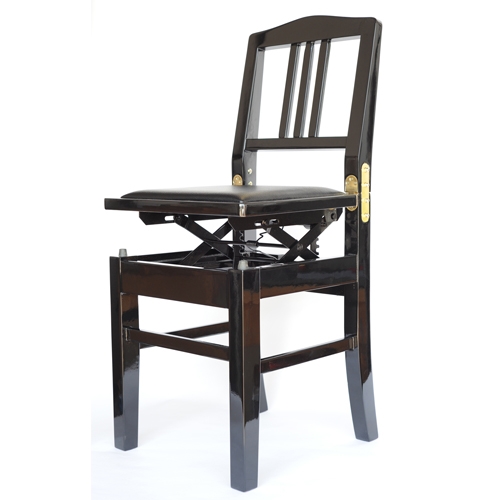 Visually appealing as they are and fairly comfy, too, these chairs only go as low as 17″.  Strike that option from my list.

With my performance of the Goldberg Variations quickly approaching, I needed to find a solution and fast.  My search brought me to the Salvation Army thrift store in Oakville.  Given the fact that Glenn named the Salvation Army as one of his beneficiaries (the other being the Toronto Humane Society) I always like to think of him whenever I go into one of these stores.

This particular location had a whole basement devoted to furniture and, armed with my trusty measuring tape, I cased the joint as it were, examining carefully and assessing every piece of seating equipment.  Having previously come up unsuccessful at a few other thrift stores, I was determined to find a suitable chair.  Suddenly, I spotted what I instantly knew would work. 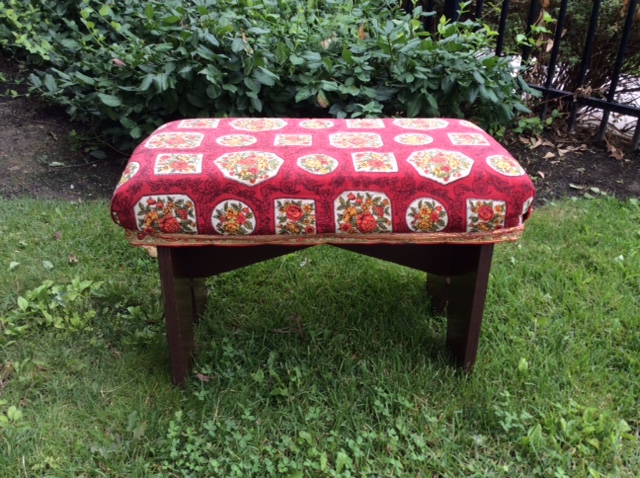 Measuring just 13.5″ off the ground, I had located a sturdy, old and somewhat gaudy mini bench.  The base had two legs made from solid wood and the top had what appeared to be a cushion added after the fact.  Showing the photo to my mom, she exclaimed, “my grandfather had the same bench only without the cushion!”  Old as the piece was, it was well cared for and, priced at just $9.99, I couldn’t resist taking it home.

Upon returning with my new bench, I had to figure out how to convert it into something suitable for concerts.  After wiping it clean and sanitizing every inch, I bought some black spray paint and tackled the brown legs and under portion.  The job was quick and easy and already the bench was taking on a “concert dress.” 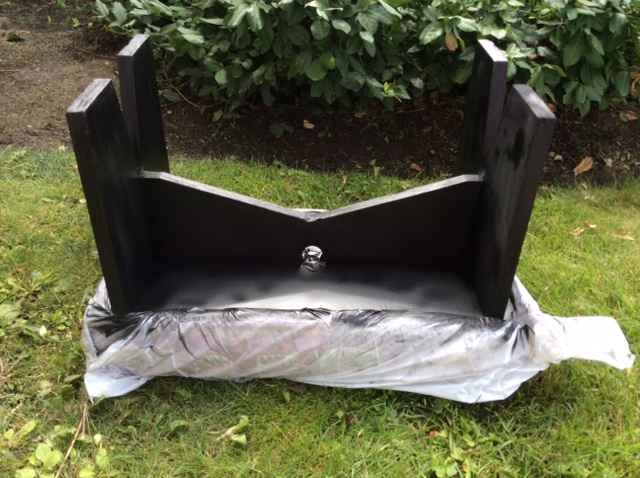 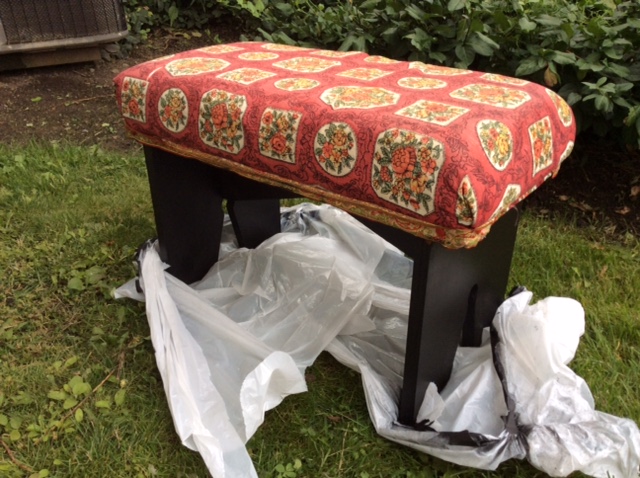 Following completion of the spray painting, I had to figure out what to do with the red, floral cushion.  Again, I sought the advice of my mom who suggested we look together at the fabric store for something to drape across the top of the bench.  During my summer trip home to the Soo, my mom and I went to Fabricland to check out black fabric.  Having already visited my local store here in Mississauga, I had an idea of the kind of fabric that would work.  Nothing thin, no plastic and no corduroy!  Sticking to my piano bench in a live concert setting was not something I was keen to experience.

Success arrived and my mom and I found a sturdy piece of simple, classic, black fabric.  Over the top of the bench it went, accompanied by a large safety pin on either side.  Voila, I finally had my own version of Glenn’s chair, one that didn’t creak and sway, one that I could use to perform the Goldberg Variations. 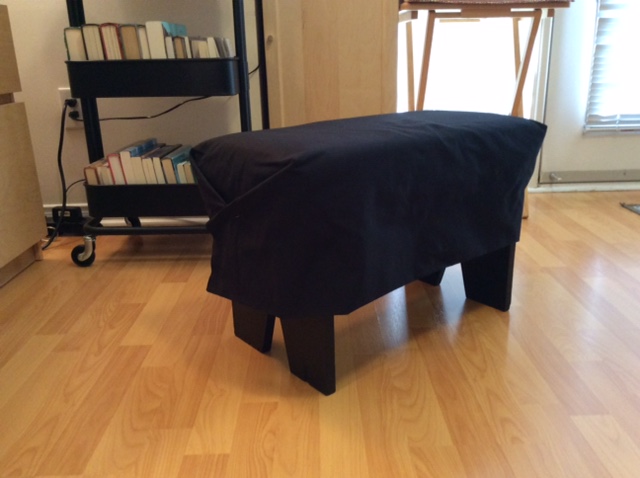 Sitting at just 13.5″ off the ground, it’s a decent looking little bench.  Admittedly, I had been rather concerned about the sloped floor at the venue in question (a church in Brampton).  I knew that on a sloped floor with my current seating arrangement, I would not be able to properly execute the difficult passages of the Goldberg Variations.  Finding this new bench would not only solve the issue of the sloped floor, but also would give me a chance to explore my technical equipment and how it performs when lowered by several inches.

Gracious as the church staff was, I was permitted to rehearse my program prior to the recital.  Under my arm went my trusty little bench and it was on that occasion when, following my rehearsal, the music director walked over to me and asked, “Do you always sit so low?”

What I hadn’t realized about sitting “solo” at the piano (pun intended) was that it does put a bit of a strain on one’s shoulders and leg muscles.  Seated at this height of 13.5″, one not only has to adjust the angle at which the eyes are cast downward upon the keys, but also one must raise the angle of one’s pedaling foot in order to compensate for being low to the ground.  None of these things I had realized in the few minutes I spent on Glenn’s chair.

I really don’t know how Glenn managed to perform exclusively on that chair of his.  Mind you, it has been said that he didn’t practice.  Interestingly, as Lorne has told me, Glenn liked to sit low at the piano because it allowed him to pull the keys as opposed to pushing the keys.

Considering all of this, I decided it might be a good idea to have on hand, a piece of wood for added height as needed.  My trip brought me to my local Rona hardware store where I was aided in finding some solid spruce which I had cut into 3/4″ pieces and measuring 13″ in length. 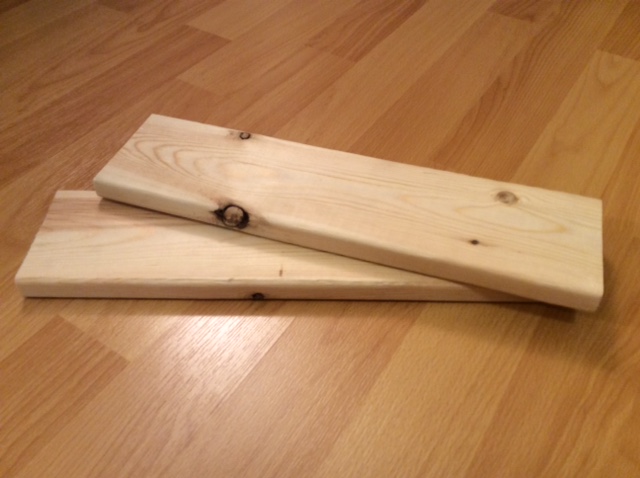 I then took my freshly cut pieces of spruce and smoothed the rough edges with sand paper. 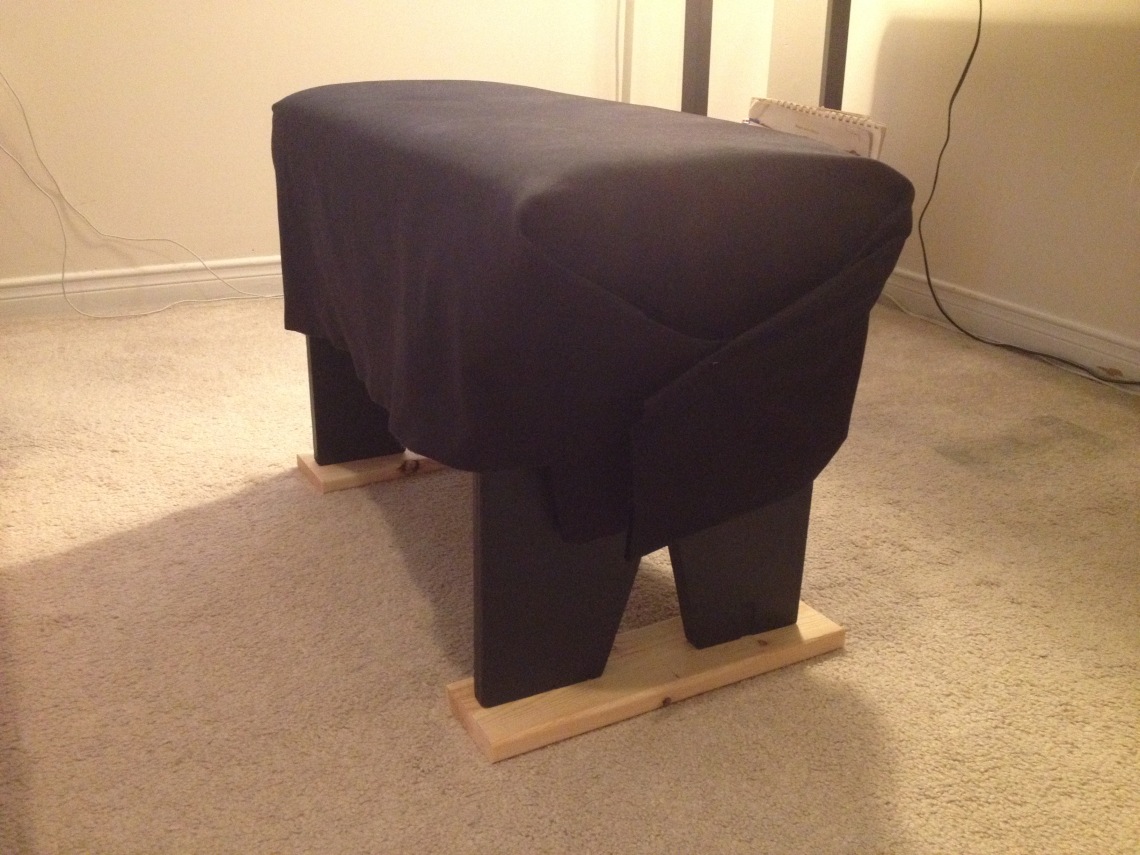 In the end, it turned out that I didn’t need the spruce “boosters” for the recital however, I have no doubt that in the future they will come in handy and I am very happy to have them.  (This isn’t the sort of thing that one can find at the last minute before a recital!)

My performance of the Goldberg Variations later that month marked my first time sitting below 17″ and I’ll admit that sitting close to the keyboard (practically at eye level with the keys) not only aided things from a technical perspective, but it also brought me closer to the listening process itself.  Seated lower to the ground, I felt more in control of my sound.

While it remains to be seen just how many public performances PGB (Penny’s Goldberg Bench) will make, it is, as with all of my books and recordings, a valuable tool in my musical toolkit.

A Canadian pianist and writer with an interest in Johann Sebastian Bach, Glenn Gould and the exploration of methods for thoughtful communication. View all posts by Further North

This site uses Akismet to reduce spam. Learn how your comment data is processed.

If you enjoy my perspectives on Glenn Gould, then please consider a contribution to my tip jar. Thank you!